By Member of the Month

LIVE WELL is pleased to introduce Paul as our Member of the Month for July. He is sharing his journey to LIVE WELL in his own words. We hope it inspires you as much as it inspires us.

A doctor’s scale is like a compass: It can’t tell you, but it can point the way to where you need to go. That’s the way it was for me when I stepped onto my doctor’s scale on the first clinic day of the New Year in 2016.

At some point over the holidays, I had run out of one of my blood medications. The pharmacy wouldn’t give me a refill because it had been too long since my last face to face appointment. So there I was on January 7th sitting impatiently in my doctor’s waiting room…waiting.

I had noticed as the nurse took my blood pressure, that it had been very high, higher than I’d ever seen it. As I waited, I hoped that I could get in, get my refill, and get out of there fast. Like most people, I’m a busy guy. I didn’t have time to sit around waiting for my meds.  I just wanted to be on my way.

Everybody knows the week after New Year’s Day is no time to make resolutions about diet, exercise, and healthy living. But in the week following the so-called ‘Holidays’ a mixture of guilt, peer and media pressure can make people may think or talk about making resolutions of various kinds. But very few actually follow through on what they may think or say; those who do usually lose their focus within a few days or weeks.

I think this is especially true of people just starting out on the change journey. In daily life there are just too many tasks, distractions and temptations out there, pulling us in all directions.  Along the way it’s awfully easy to forget about important things like blood pressure, diet and exercise.

I knew the doctor’s office routine. After calling me in to the exam room, the nurse first took my blood pressure and wrote it in my chart. Then she’d close the examination room door leaving my chart in the pocket on the outside of the door. Then just before entering, my doctor would look briefly at my chart before entering. Through the closed door I could visualize him reading those awfully high BP numbers.  He came in.  He didn’t mess around: “Your blood pressure’s up quite a bit.  How much do you weigh?” Weakly, I tried to deflect: “I’m not sure. I guess I’ll find out one of these days.” The doctor replies: “Let’s find out right now.”

I was born in 1957, in the middle of the so-called ‘Baby Boom Generation, the large population of people born in the couple of decades immediately following World War II.  From 1945 onward many but not all North American children were privileged to grow up in a time of peace, relative prosperity, and an unusual degree of material comfort.  I had been one of them. Unlike many of my parents’ or grandparents’ generation I had never experienced hunger, homelessness, poverty or significant want of any kind.  In contrast to people who had lived through the Great Depression of the 1930’s and the Second World War, baby boomers have lived lives of unprecedented material comfort and ease.  Now with the leading edge of the Baby Generation entering their mid-70’s, the effects of this affluent lifestyle were beginning to show in the form of higher rates of High Blood Pressure, Type II Diabetes, Heart Disease, Stroke, and Obesity. Looking around, the effects of these ‘diseases of lifestyle’ have been really easy to see. All I had to do was look in the mirror.

I stepped upon onto my doctor’s scale.  I remember saying something along the lines of, “This isn’t going to be good.” “I can hold my hand over the numbers if you want me to.” he said. “That’s O.K.”, I said, bravely.  “I can handle the Truth.”

But I wasn’t all that sure that I could. Still, as I stepped onto the scale I knew there could be no going back. For me the reading on the scale was as welcome as a super-tight fitting pair of jeans. I weighed over 304 pounds! I was completely ashamed, disgusted, and mortified.  At the age of 58, I’d never weighed more in my life! From all the reading that I had done over the years, I realized that I was well into the zone of ‘morbid-obesity’, a term reserved for people more than 100 pounds to lose. As a baby-boomer who has found himself in what has become a life-long struggle against obesity, and I was failing, big-time. My higher blood-pressure readings were another ominous warning. I knew I had to do something.

At times over the past half century I had lost considerable amounts of weight only to gain it all back again, the cumulative effects of inattention, distraction and careless neglect.  Now the truth that I was confronting for the first time was that I was losing in my struggle against creeping obesity.

I stepped off the scale.  I was emotionally deflated, resigned. I had no idea what I would do next, so I did what anyone who had just been come face to face with reality would do: I surrendered.

Often, necessary change only happens as the result of some kind of crisis: a heart attack, a dangerously high blood sugar reading, a stroke.  Human beings are actually pretty good at paying attention to such events and making changes after the fact; but the more subtle warnings are easier to ignore and I had to admit that I was just one of many people who do ignore them.

A half-century long struggle with Obesity.

Thankfully, my own health scare crisis came before one of those life-changing events. I had yet to suffer a fatal or near-fatal heart attack or stroke, and no one had ever told me that I was now a diabetic. My own symptoms had mainly to do with high blood pressure and too much weight. For me the hardest part was to admit was that I wasn’t as effective and autonomous a ‘free agent’ as I thought I was.  After close to a half-century of solitary struggle, I had to admit that I needed to get some help.  But still, I didn’t ask.  Help had to be offered.

Those simple words made a huge difference to me.  Even though I was the only one who could actually lose the weight, at least I knew my doctor meant to help me if he could. He was the first in what has been an increasingly long list of people who’ve helped me, in all kinds of small but significant ways.

British Columbia has an aging population. Projections as far ahead as we care to look show us that B.C.’s population, now 4.8 million will be 5.4 million in 2029 and over 6 million in 2041. But the most important demographic trend shows a marked increase in the number of people aged 65 and older over those same years. Today, only 888,000 people are 65 or older, but by 2029, those over 65 will total 1.3 million and by 2041, 1.5 million British Columbians will be over 65. Potentially, that’s a lot of weak, sick, tired, hypertensive, diabetic, cognitively impaired, fat and de-conditioned people.  But the opposite is also a possibility. Shouldn’t it be possible for me, or most any aging adult to take some degree of control and personal responsibility and to make progress in driving down the risk factors that diminish my life expectancy and lessen the quality of my life? I think the answer needs to be yes.

Instead of giving me a lecture, or handing me an information sheet on how to count calories and sending me on my way, my doctor described a program of medically supervised intervention and support at a place called LIVE WELL Exercise Clinic. This kind of long-term intervention has made all the difference for me.

Somewhere along the way I had decided that I would be open, not-closed to any possible program of intervention that might help me take greater control of my risk-factors and turn the corner on my life-long struggle with Obesity and hypertension. These diseases have the potential to shorten and even to end my life!  In the year and a half since coming to LIVE WELL I have taken full advantage of the comprehensive approach offered. By accepting the structure of the program, by showing up and working the program three days per week and by taking additional exercise in between times, I have experienced a fair bit of success. By focusing on more than one dimension of health; by paying attention not only to diet and nutrition, but also to exercise: endurance, strength, flexibility, and balance; by keeping an eye on potential problems before they arise: monitoring blood glucose levels and periodic heart monitoring, by setting goals, keeping a food diary, and paying attention to all the little things that add up to big changes over time, I am increasingly hopeful that I may yet turn the corner on both Hypertension and the Creeping Obesity that I have struggled with for most of my adult life.

The Results So Far

Since January 2016 I have lost over 80 pound of body weight,  reduced my blood pressure by more than 30 milliliters of mercury, and increased my physical strength, flexibility and endurance, and reduced the size of my clothes going from 2 or 3 XL down to L or XL. I have also formed new habits that include regular daily exercises such as cycling to and from work, and lots more walking. These have helped me to not only keep my weight and blood pressure down, but which have helped me cope with stress on and off the job.

Where to from here?

My hope is that over the next year I will be make further progress toward my long-term weight loss goal and continue to see increases in other fitness measures, which can slow the debilitating effects of aging. Through good nutrition, exercise and consistent effort, I hope to remain attentively conscious and successful in improving my overall health and life-expectancy, as well as having a renewed sense of accomplishment and control. Time and effort will tell, but I do know that for this plan to keep working I have to work the plan.

What seems to work?

Here are a few of the tips that I’ve found helpful over the past year and a half:

Every step you take in pursuit of your own renewed health is a step in the right direction; when the going gets tough, just keep going!  See you at LIVE WELL!

Thank you to Paul for sharing his story, insights and tips with the rest of the LIVE WELL Community. He is truly a motivation to us all. Paul says it best “Keep going, and don’t quit. Don’t ever quit!” You heard it LIVE WELLERS…Go LIVE WELL Community! 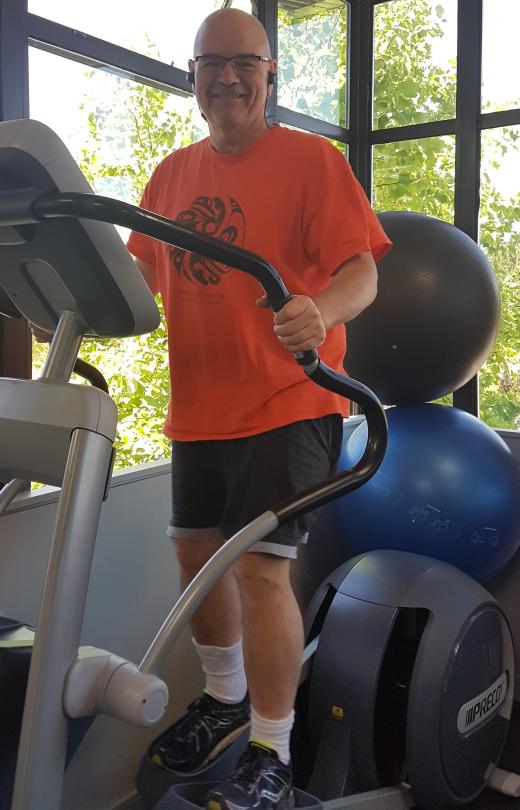 Member of the Month

Experience your very own customized exercise session in our safe environment.

Our highly-trained exercise physiologists know exactly what you need to do so that you can live your life to the fullest.

You'll be so proud you started now.